A Complete Guide to Treating Woodworm

Woodworm is a general term that is used to describe a number of beetles whose larvae are wood boring. Here in the UK, there are several of these species that can be encountered but the most common to cause problems is the larvae of the Common Furniture Beetle.

Generally, woodworm larvae have a creamy white body colour and they are curved in shape.  In most cases, you never actually see the larvae that are causing the problems as they are hidden away, eating through the timber they have found until they are fully grown into adult beetles.  These adults can look different depending on the species with the Common Furniture Beetle being brown in colour with wings and typically around 3-4mm in length.

Woodworm has four stages of development – egg, larva, pupa and adult.  Adult female beetles usually lay their eggs on or just below the surface of wood where they find pores, crevices or cracks.  This creates a safe place for the eggs to hatch and means the new larva have something to feed on when they emerge.  The larvae can feed for years until they reach the stage to pupate and hatch as beetles.

Once the beetles are mature, they then leave the wood where they have grown up and move to find a mate.  This is when the process begins again with new female beetles laying eggs in wood, causing a new round of damage to the timber.

Other types of wood boring beetles found in the UK include the Deathwatch Beetle, the House Longhorn Beetle and the Powder Post Beetle. 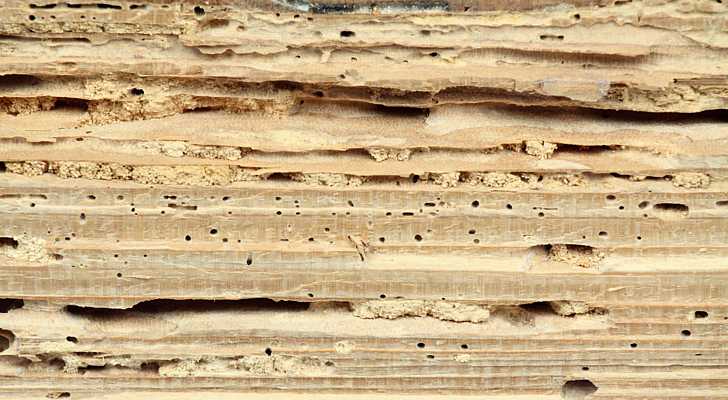 One of the biggest problems with woodworm infestations is that it can take years before you can spot the signs that you have a problem.  But there are a few visible signs to watch for around the wood in your home:

During the woodworm season from May to October, you might also spot the adult beetles emerging from holes in the wood.  When a beetle has chewed out of its hiding place, instinct tells it to head to the light.  So you can look at the area around the wood for live or dead beetles.  You can also look for Steely Blue beetles as these are a primary predator of the Common Furniture Beetle – if you see one, then the other is also present for them to predate.

Exit holes are the most obvious sign of an infestation but these don’t appear until the adult beetle is prepared to leave the wood, sometimes years after the original larva hatched.  Frass is a good sign to watch for, especially in undisturbed areas such as the back of furniture.

Just because you find holes and frass don’t mean you have an infestation as these could be leftovers from a previous infestations years back.  But if you want to have checks done, it is best to contact an expert in dealing with woodworm.

There are a number of places where you are most likely to find woodworm and where you should concentrate efforts to detect it:

Why does woodworm infest?

There are different reasons why these beetles might choose your home.  For starters, different species prefer different woods – some like softwood such as pine or cedar while others prefer hardwoods such as oak or mahogany.  But all like wood that is damp because it makes it easier to chew.

The Common Furniture beetle will turn up in any type of wood and in any spot around the house but does prefer damp floorboard or loft timbers as well as furniture that doesn’t have varnish on it or has worn patches.  Female beetles tend to choose wood that has a moisture content of 28% or more as this makes the best situation for larvae to pupate.  But some beetles can go down as low as 12% moisture content.

The Common Furniture larva will also only eat the outer or sapwood section of a tree because this is where the most nutrients are found and there are no toxins, unlike the inner heartwood.  So if furniture is made from good quality heartwood there is a lower chance that it will become infested.

Deathwatch Beetles tend to go for hardwoods such as oak and elm that have been affected by fungal decay so are more common in older buildings and antique furniture.  Central and southern England are the areas most likely to see this type of beetle that is known for the tapping noise adult males make to attract a mate.

House Longhorn beetles are found mostly in the south-east of England and are the most damaging type of woodworm.  They attack the sapwood of softwoods and grow to 30mm in length, meaning their exit hole is around 10mm in diameter.  They are most often found in roof timbers.  They create a lot of frass and also small pellets that give a blistered appeared to wood.

How serious is the problem?

The type of beetle, the size of the infestation and the wood that has been infested all play a part in the seriousness of the infestation.  Not all woodworm is harmful but left alone, it can weaken timber and the structure of a home.  And the House Longhorn Beetle is very serious but all potential infestations should be checked by an expert.

There is steps you can take to prevent woodworm including ensuring that wood is dry and that your home is well ventilated and heated.  Buy good quality heartwood furniture and use sealings such as varnish.  If you buy older furniture, check for signs of woodworm and remove anything infected from the property.

There are different options available to remove woodworm but you should always speak to specialists before using any DIY methods.  Small infestations can be treated with Permethrin-based products but infestations by Deathwatch beetles tend to be deeper so an injected solution is best.

If you have a House Longhorn infestation, then  the affected wood in the house will need to be treated so a specialist is definitely the best option.  If you think you have any problems with woodworm, you can contact TapCo HomeDry and we can arrange to visit your home and conduct an assessment then advise on a course of action.