High Wycombe, often referred to as Wycombe, is a large town in Buckinghamshire. It is 29 miles west north west of Charing Cross in London; this information is also engraved on the Corn Market building in the centre of the town. It is also 17 miles south of the county town of Aylesbury, 27 miles southeast of Oxford and 9 miles north of Maidenhead. It the second largest town in the county of Buckinghamshire after Milton Keynes. 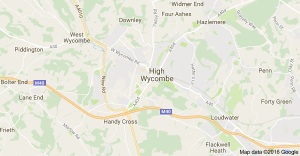 Tapco HomeDry recently carried out considerable Dry Rot eradication and restoration works at a 1930’s built, semi detached house in High Wycombe which had been caused by a minor, long term plumbing leak under the floor combined with Rising Damp. Although the property was constructed with a physical damp proof course membrane, in the past this had been bridged by a concrete and stone terrace. A thorough survey was carried out by our Property Care Association (PCA) qualified timber and damp surveyor, who detected the cause of the damp and dry rot, prior to determining the extent of the decay and damage. Several areas of flooring were lifted and small areas of wall plaster were removed to expose the spread of mycelium. It was found that the extent of the attack was virulent and considerable and had spread through the party wall into the neighbours adjoining property.

Our experienced and trained operatives removed all of the affected flooring timbers to approximately 30cm beyond the last visible sign to carefully dispose of. The damp and affected wall plaster was also removed to 30cm beyond the attack and disposed of. Prior to carrying out the dry rot treatment a new chemical (cream) damp proof course was injected to the base of the damp walls. The exposed masonry and oversite were thoroughly cleaned and the walls were treated with a fungicidal masonry treatment. All of the floor joists, plates and floor boards were replaced using new pre treated timber and the walls were re-plastered strictly in accordance with our specification. New skirting timbers were fitted and the rooms were left ready for decorating. Externally, a drainage channel was installed, together with new air-bricks, to increase the flow of air beneath the floor.

A survey was carried out on the neighbours property prior to us commencing their work. We are long term members of the Property Care Association (PCA) and Trust Mark (Government Endorsed Standards). We are also an accredited Which? Trusted Trader so like our clients in High Wycombe, you can Trust Tapco.