Southampton, on the South coast of England, is the largest city in the ceremonial county of Hampshire.It is 75 miles south-west of London and 19 miles north-west of Portsmouth. Southampton is a major port and the closest city to the New Forest. It lies at the northernmost point of Southampton Water at the confluence of the Rivers Test and Itchen,with the River Hamble joining to the south of the urban area. The city, which is a unitary authority, has an estimated population of 253,651.

If you think you may have Dry Rot affecting your property in Southampton or Eastleigh, Hampshire for sure you will also have damp. We cannot stress enough the importance of taking immediate action and instructing a Tapco HomeDry, Property Care Association (PCA) surveyor to assess the damage and report on what urgent treatment and restoration is required. 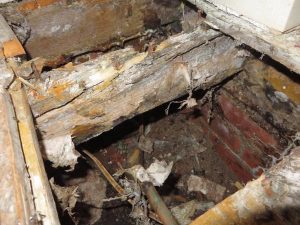 The wood destroying fungus, Serpula lacrymans is commonly known as Dry Rot, however its name is rather inappropriate since it requires water for germination, growth and survival. Indeed, water/dampness is the fundamental need of all wood destroying fungus plus of course a food source, wood. Without either the fungus ceases to grow and dies.
When water penetrates wood it allows bacteria and micro fungi to colonise. These break down part of the cell structure and the wood becomes porous which allows it to become even wetter. When the wood is sufficiently wet and other conditions are suitable, dry rot can colonise. A minute spore of dry rot lands on damp timber and germinates before the first growth emerges. As the wood is broken down by enzymes secreted by the growing fine hyphae the wood becomes even more porous and allows further damp to penetrate.
The fine filaments of fungal growth hyphae soon develop into a larger mass of mycelium which grows over and into the wood and through masonry. Under humid conditions the mycelium is white and cotton-wool like and in a very humid and stagnant environment droplets of water will form rather like tear drops, hence the name lacrymans. These droplets are caused by the fungus removing excess water from the wood.
When the attack is advanced a fruiting body (Sporophore) may develop. This takes the form of a ‘fleshy pancake’ the surface of which is covered with wide pores which is an orange/ochre colour. The corrugations form the spore bearing surface. Large numbers of spores collect around the fruiting body and form a red ‘dust’ often visible on the surfaces of joinery and furniture where there is a significant attack of dry rot.
Unlike other wood destroying fungi dry rot can grow significantly on and through masonry and in ideal conditions growth may occur over and through dry materials. Distances in excess of 2 metres away from its food source are sometimes found and it is this ability that can lead to significant problems of spread to other rooms and even adjoining property.
A minimum moisture content of 28-30% is required for an attack of Dry Rot (Serpula lacrymans) to initiate on timber but once established, the fungus can remain active with a lower moisture content of 20%. At a relative humidity below 86% the growth is inhibited but can remain dormant with a lower humidity of 76%.
Locating and rectify the source of water and promoting rapid drying is a priority. Removing the affected timbers, its food source and exposing the affected areas will relatively quickly stop the spread of attack. It is of the utmost importance that dry rot restoration work and treatment is only carried out by a specialist company only. Using a contractor who is not a member of the Property Care Association (PCA), including attendance building work, should not be considered. Tapco HomeDry fully understand and are very experienced with all of the factors involved in dry rot eradication, the significance of the control measures and associated risks. Using us for all of the work will also eliminate the problem of split responsibilities brought about by part of the work being carried out by a third party and serves to eliminate the cause of many continued outbreaks and very costly disputes.
Tapco HomeDry has been established and continuously trading since 1971 and are recognised as one of the UK’s most established and reputable Dry Rot and Damp eradication companies. We cover all of London, Surrey and the Home Counties and are long term members of the Property Care Association (PCA) and Trust Mark (Government Endorsed Standards). We are also an accredited Which? Trusted Trader so call us first.