We have been treating and eradicating Woodworm in London, Surrey and the Home Counties for over 46 years. 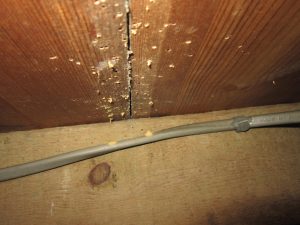 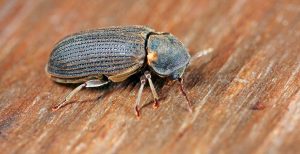 Most people who own a property come across Woodworm at sometime or the other because prior to the 1990’s many properties were constructed with untreated timber. Woodworm isn’t something that most people go around looking for but that doesn’t mean it is not there, munching away at your flooring and roofing timbers, without you knowing. Sometimes the first time you know you have woodworm is when the leg of a heavy item of furniture falls through a floorboard. The amount of damage woodworm can cause depends on certain factors, such as; The species of the infestation and the type and cellulose content of the wood. For example, the larvae of the most common woodworm, Common Furniture Beetle (Anobium punctatum) is only about 2/3 mm long where as the larvae of the House Longhorn Beetle (Hylotrupes bajulus) can be 25 mm long and as thick as a pencil. The grub can bore up and down the grain of the timber anywhere between 2 to 12 years, again depending on the species. 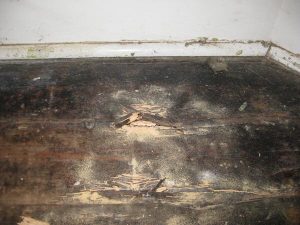 The above is image is of damage being caused by The Common Furniture Beetle commonly known as Woodworm. As long as the infestation isn’t heavy and hasn’t caused structural damage to the timber, most treatments can be carried out quite quickly and safely. Tapco HomeDry lift approximately every sixth floorboard to gain access to the undersides, joists and plates, thoroughly brush clean the timbers and apply an aqueous based timber preservative treatment to the surface of all accessible timbers, using a coarse spray. The floorboards are then re-fixed, prior to treating the top surface. The preservatives Tapco use are classed as non-hazardous and the room can be re-entered and used after one hour.

Because of the serious damage that can be caused to roof frame timbers, by the House Longhorn Beetle, we strongly advise that properties in Surrey and parts of London, where the infestation is often found, should be treated as a precautionary measure because for sure with this pest, prevention is better than cure.